The second event, as I mentioned in my previous post is what happened when I tried to film this latest travesty of democracy. Clearly my presence was noted when I entered the Public Gallery and when the row commenced over the Day Club, I started filming with my phone, (not terribly well I know but better than nothing) I was asked to leave by the Chairman and Mark James, I said that I was not doing anything wrong, it is not against the law nor even in their standing orders (rules for meetings), neither was I disturbing the meeting in any shape or form. Mr James sarcastically asked whether I now had a good photo of him to put on my website. As I didn’t leave, Mr James and the Chair called the police and then adjourned the meeting. Unlike my complaint of assault in the Public Gallery where the police took four days to take my statement and several more to speak to the chap concerned, it only took ten minutes today for two police cars and four police officers to appear in the Gallery. I tried to argue my point but was then arrested in the Public Gallery for ‘breaching the peace’. I was taken outside the door, handcuffed, searched, my phone taken and marched out to the waiting police cars. 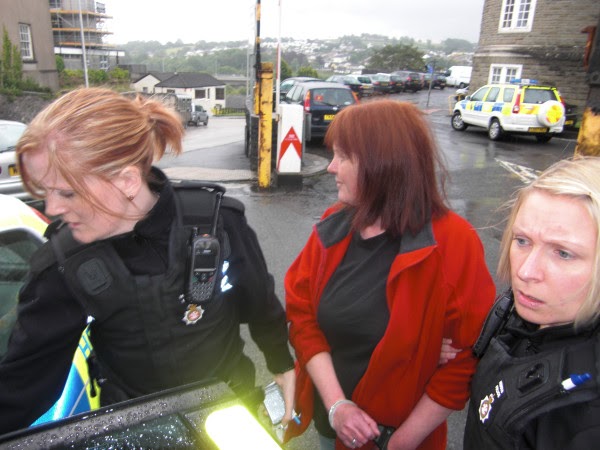 I was then taken 30 miles to Llanelli police station where I remained handcuffed for another hour before being ‘processed’, and put in a cell for another two hours.

By this time I was very disorientated, worried about my young daughter who needed picking up from school, I was cold (the police had taken my jacket and shoes and socks) and distressed. Without a solicitor present, I was then threatened by three police officers who said that if I didn’t sign an ‘undertaking’ not to film/record any more meetings I would be kept in overnight, I am not sure now whether they could even keep me that long. Earlier in the day I had been told that they was looking at the relevant legislation and were ‘talking’ to the council, it is now clear exactly what was discussed; ‘she probably can’t be charged with anything so tell her to sign and you’ll let her go’. I am now asking my solicitor about the legality of this and regardless of the outcome I will not abide by something I was forced to sign. I will be back.